Challenging Dewey in dreams and reality

Inspired by a recent dream I had where my workplace decided to abandon the Dewey Decimal Classification System (and sadly woke up before I figured out what alternative we’d gone with), I thought I’d put together some reading and podcast recommendations to celebrate those who have challenged and expanded this system and made it better It also happens to be Dewey Decimal Day today! They’re the perfect readings and resources to bring out at your library’s Christmas party, right…?!

I thought I’d start with some reminders that Dewey himself was probably not the greatest person, which may not be surprising given the system’s legacy of sexism, racism,  imperialism, heterosexism and more discrimination:

A brief history of homophobia in Dewey decimal classification by Doreen Sullivan, Overland

Naming the Love That Dare Not Speak Its Name: A Look at How Gays and Lesbians are Classified in the Dewey Decimal Classification by Michelle Drumm

These recent updates for LGBT community and transgender people in DDC are promising.

Adler, M. (2017). Classification along the Color Line: Excavating Racism in the Stacks. Journal of Critical Library and Information Studies, 1(1).

I also love the work Anne has done facilitating access to Transgender-related materials and Intersex-related materials  using Trove tags – given such material is often harder to find due to issues with classification (including but not limited to Dewey), these lists are really important and excellent!

I’ve mentioned the Challenging Dewey: Classification and Equality exhibition at Melbourne Library Service quite a few times before, but had to include it in this post.  I was a newly-graduated librarian when was on in 2016 and it has had a lasting and sustaining impact on my career. In addition to featuring work by artists responding to Doreen Sullivan’s brief history of homophobia in Dewey decimal classification, in the centre of the exhibition space, it showcased material from ALGA to celebrate some of the subversive agents of social change working in libraries who have helped challenge discriminatory classification and champion equality through subversive cataloguing, collection development and promotion (particularly through the creation and dissemination of bibliographies). I particularly remember reading about the gay librarians and libraryworkers groups of the 1970s who would have been limited in what they could do given that being out at work would have put their jobs at risk, but they recognised the importance of facilitating free and open access to LGBTIQ information and stories and challenging discrimination, and united to do so through subversive cataloguing, collection development and promotion.

My workplace probably isn’t quite ready to abandon Dewey,  so my dream probably won’t come true in the near future. However, I have been thinking a lot lately about bringing critiques of library classification systems into the information literacy classroom more than I have previously and look forward to exploring this and sharing some strategies in the new year. 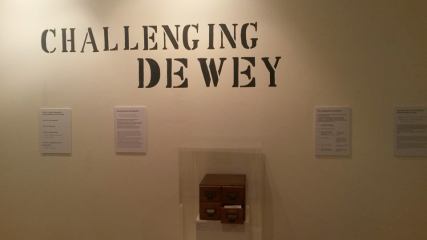 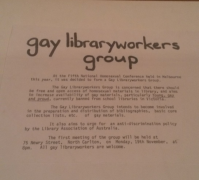 2 Responses to Challenging Dewey in dreams and reality