About a month before I was due to go to LGBTQ Archives, Libraries, Museums and Special Collections (ALMS) Queering memory conference in Berlin, an invitation came into my email inbox at work from Son Vivienne and Quinn Eades. It was an invitation to participate in a Reading/Making Room space at the Arts House in North Melbourne in early July with both my La Trobe University Library and Australian Lesbian and Gay Archives (ALGA) hats on. It was connected to the audio-visual exhibition Queerdom by James Eades (photographer Jamie James and poet Quinn Eades) and designed to facilitate community exploration of themes of body, time and place through creative collaborative practice, thinking, reading, discussing, and making theories, histories and practices, and launch Making the Margins, an interdisciplinary collaborative creative research lab hosted by La Trobe:

“Our new creative lab is a way of enabling all of us who live, work, create, and research in/from ‘the margins’ to share their experiences and create something new – with the power to bring about positive change.” – Quinn Eades

I knew the timing was complicated, and that I’d be very jetlagged, but it was pretty much the space of my dreams, so I jumped at the chance to help make it happen.

I gathered books from La Trobe University Library’s collection, material from ALGA, and sent a wish list of books from Melbourne Library Service before I left (and they added to it) so we had a nice mix of art books, critical theory, creative non-fiction, poetry and volumes that didn’t fit into any neat category. These collections were augmented by zines from Sticky Institute, work from Son’s Stories Beyond Gender project, and words from Quinn. Participants were encouraged to read, think, chat, and make zines, badges or anything else, and then add a record of their creations and thoughts to a map of time, body and place. It was one of the most GLAMorous (and meta!) things I’ve been part of and one of the spaces I’ve been most comfortable and safe since becoming a librarian. Not only did I get to work with some of my creative academic queeroes, Quinn, Son (who I cited in a few library school assignments!) and Roz Bellamy more than I usually get to, I also got to meet Jamie James and Alex Bayley (in real life) and more. I’m hoping to be able to help create similar digital and pop up physical spaces at La Trobe University Libraries in collaboration with local public libraries (Darebin, Yarra Plenty, Goldfields, Albury, Wodonga, Shepparton, and Mildura).

Scenes from a reading/making room 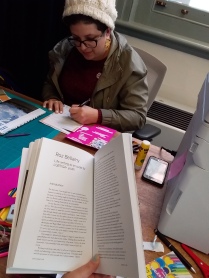 I’m thinking one of my next steps might involve spaces for finding/feeling/discussing/reading/making the margins in the marginalia inspired by this, the marginalia found in La Trobe University’s copy of Sara Ahmed’s The Promise of Happiness and the work of a new academic I met recently.

Now back to Berlin: It was the first LGBTQ ALMS conference I had attended and hopefully won’t be my last one. I loved that there was a great mix of scholarly, creative, GLAM and technical presentations (and films, displays, and performances in between the presentations) which made it unlike any conference had been to before… and has possibly ruined mainstream library conferences in Australia for me now! It was hard to choose what to see as everything looked so great. Thankfully, most presentations were recorded and have been recently released, so I have been able to listen to a few that I missed and revisit a few that I loved. Some highlights included learning about: queering Wikipedia in the US, Albania and Tunisia; community archives in Cork and Canada; a huge and inspiring German language cataloguing-related project and network (Queer Search); the Pittsburgh Queer History Project; some unconventional and participatory audio guides for queer libraries; LGBTIQ+ community partnerships with GLAMorous institutions including several connected to Bolton Library and Museum Services and the British Museum, and creatively queerying science archives and museums and heritage houses (like Sutton House and Alice Austen House), and more. It was also great to meet and connect with people who I have been following and working with over the past year or so in real life for the first time, and to be part of the community archives caucus discussion which led to the creation of an online LGBTIQ+ community archives knowledge sharing platform.

Putting the ship in librarianship with outfits at LGBTQ ALMS

I also loved seeing some of the work I heard about at LGBTQ ALMS when in London the following week. 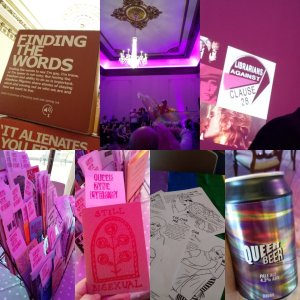 I was feeling exhausted, burned out, and increasingly cynical before I went to Berlin, but both LGBTQ ALMS and Reading/Making Room have really reinvigorated my GLAM practice, given me much needed hope during a time of great uncertainty, and inspired me to start creating and remaking histories as well as preserving and facilitating access to them.  My mind has been bursting with thoughts, ideas, feelings and more reading, and I hope to write more once I have consolidated them all a bit more.

I’ve already started building on these thoughts/ideas/feelings/readings when revising classes for semester 2, particularly one on archival research for making history, initiating a project to gather and share reading recommendations in the stacks and on social media, and in a few other ways that may be revealed in the near future.

Confessions of the Fox by Jordy Rosenberg

Paul Takes The Form of A Mortal Girl by Andrea Lawlor

Recordings of most papers from LGBTQ ALMS

Behind the glass cabinet podcast

Beyond the Binary at Pitt Rivers Museum (Oxford University)

‘Shout queer!’ The museums bringing LGBT artefacts out of the closet